The deployment of large orchestras with a wide range of timbres and registers is one of the most distinctive elements of 17th and 18th French music. It is characteristic of the French art of music from Rameau to Ravel via Berlioz and Debussy. These orchestras were unique in Europe at the time and were widely admired. They were one of the most visible manifestations of the Arts used to serve the Monarchy which, after the Renaissance, had become aware of the potential political role of music and spectacle at national and international level.

Music as an institution

Henri IV, Louis XIII and especially Louis XIV purposefully developed and institutionalised music at Court in the 17th century. Later on, the major Paris theatres and the famous Concert Spirituel society (1725-1791) enjoyed royal largesse and created impressive music ensembles in the wake of Versailles. They developed further during the Regency of Philippe d’Orléans (1715-1723) and continued up until the Revolution.

The Kingdom of France became increasingly centralised under François I and Henri IV, the main musical establishments being located near abbeys and cathedrals and the royal Court. In the 17th century the centres of power in Paris and Versailles facilitated the institutionalisation of the still loosely organised royal music departments, and defined the whole concept of an orchestra - its administrative, logistical, structural, artistic and musical aspects. 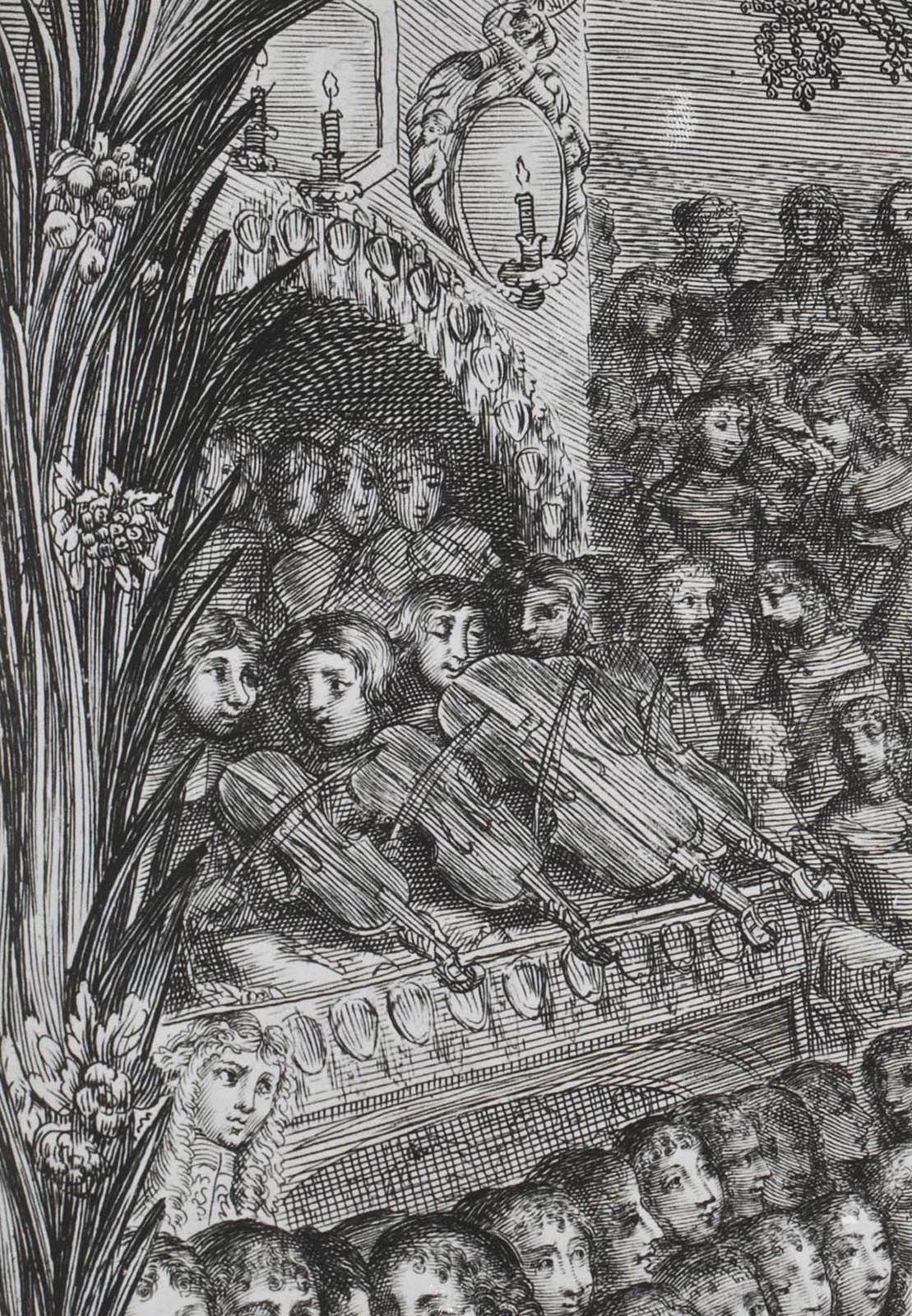 The emblematic music of the Vingt-quatre Violons du Roi

More than any other musical ensemble at Court, the Vingt-quatre Violons du Roi (or the Grande Bande as it was known) embodied royal splendour. It was first part of the Écurie du Roi orchestra, but joined the Chambre orchestra around 1570. Louis XIII made the ensemble officially autonomous around 1620. Its prestige soared when Lully took over as director in 1653. The discipline and rigour he imposed (unusual at the time) earned the orchestra great respect. The Vingt-quatre Violons du Roi fascinated Europe and was copied in many foreign Courts. The composite Grande Bande was a must at all solemn religious festivals and royal occasions.  The orchestra played at repasts held in the Grand Couvert. Lalande composed special suites for these occasions (Symphonies pour le Souper du Roi). In the 17th century the Vingt-quatre Violons du Roi also performed at court, at masked or costume balls as well as operas or comédies-ballets.

Initially, the distribution of violins was similar to that of the Renaissance consort  - i.e. 6 dessus, 4 hautes-contre, 4 tailles, 4 quintes and 6 basses. Designed for open-air concerts, this ensemble sounded well without any wind instruments or continuo: the large numbers in the three intermediary sections provided rich harmonies and marked rhythms. Its role explains the relatively rudimentary repertoire in the 17th century, the homorhythm and simple harmonies. 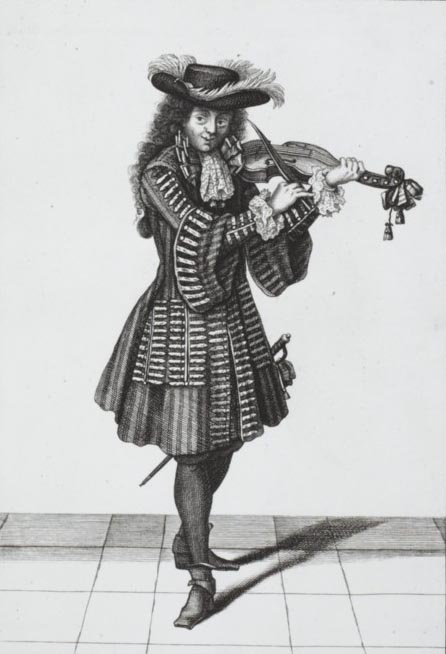 In the early 18th century practices changed and the Vingt-quatre Violons du Roi performed less frequently outdoors. A continuo and wind instruments were often requested, necessitating a review of the string section quintes disappeared in the 1700’s and hautes-contre and tailles merged around 1740, while the number of dessus increased, finally splitting into first and second violins. The proportion of basses also increased. By the time the Vingt-quatre Violons du Roi was dissolved in 1761, the orchestra had acquired a pre-classical structure, along the lines of the contemporary Mannheim orchestra.

The Académie Royale de Musique formation was originally like other Court ensembles. In 1680, the string section resembled the Vingt-quatre Violons du Roi (although it had more violins and bass and fewer intermediary instruments), with a continuo formed by theorbos and harpsichord and a wind section comprising flutes, oboes and bassoons. By the early 18th century the orchestra numbered around forty musicians. This orchestra (which played Campra, Destouches, Rebel, Francœur and Rameau) changed little until the mid-1760’s, albeit occasional use of musettes or percussion. When Berton and Trial ran the institution in 1767 the numbers increased – violins and wind instruments were added, and horns, clarinets, trombones and later the harp featured more regularly. This was the formation Gluck found when he arrived in Paris in 1773. His ‘reformed' musique required an even larger orchestra. In 1778, almost eighty musicians were to be found in the orchestra pit, including 28 violins, 6 altos, 12 cellos and 4 double bass.

The distinctive feature of the Académie Royale de Musique orchestra was its combination of a large instrumental ensemble and a small solo choir, the former backing the choir at overtures ballets and descriptive pieces, the latter accompanying recitatives (4 cellos, double bass and harpsichord) and short solo pieces (two violins and solo flute playing the high lines). This orchestral formation ended with the 1799 reform which instituted the use of soloists and super-soloists.

The large unified orchestras during Lully’s time (1710 – 1730) heralded the instrumental art form, with composers such as Campra, Destouches, Rebel and Francœur. 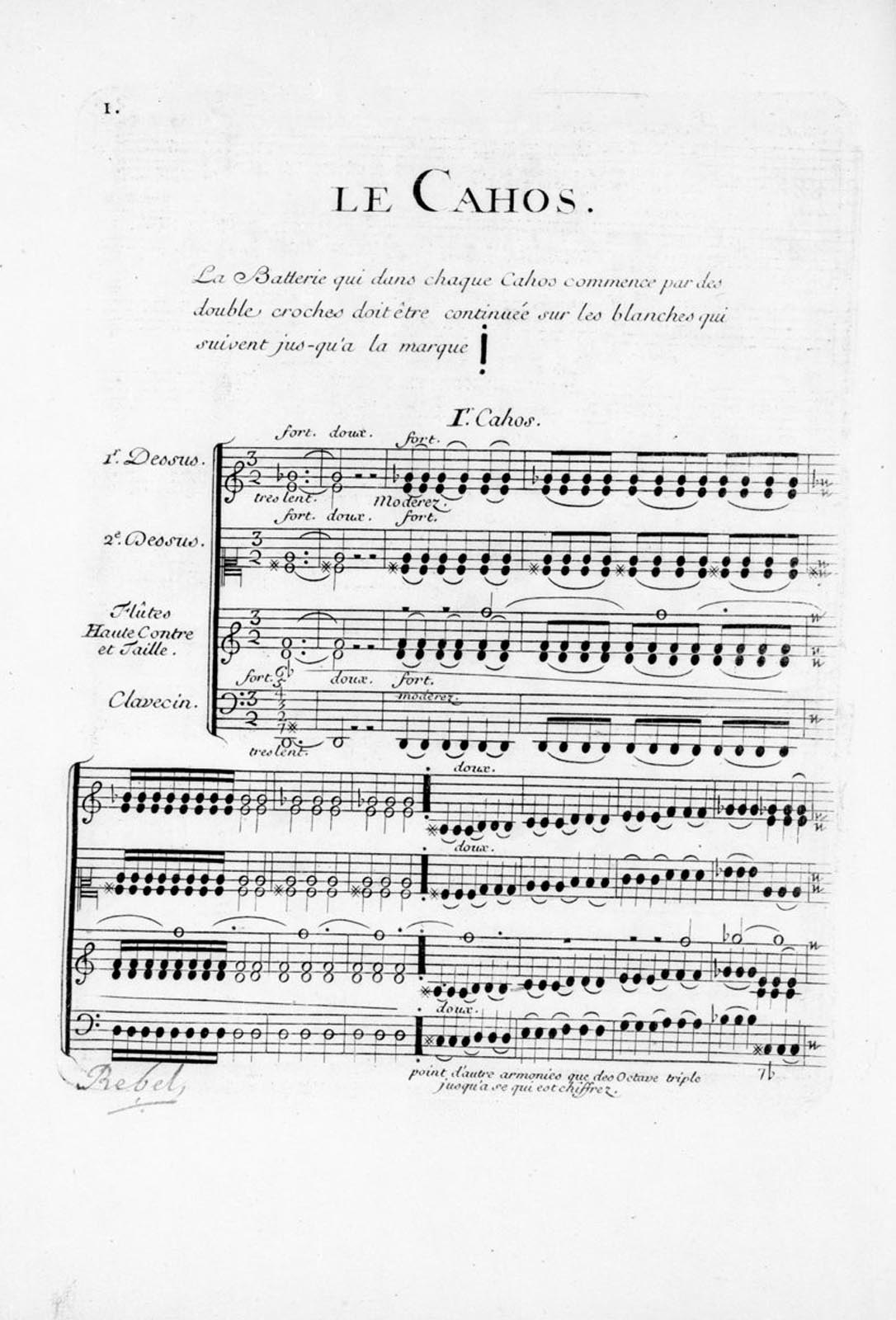 Colasse, Marais and Desmarest conducted the first acoustic experiments, but it was Rameau who revolutionised orchestral composition between 1733 and 1763. He introduced the unexploited timbres of the small flute, horn and clarinet (notably in Acante et Céphise, Zoroastre and Les Boréades. At the same time violinists like Leclair, Mondonville and Dauvergne broadened the scope of orchestral virtuosity with Italian influence from Vivaldi and Locatelli. This paved the way for the Académie Royale de Musique to accept the international classical style.

Musicians were placed according to the venue. Theatres proved the most problematic, the solution being a semi-circle facing the stage (the opposite of today) to keep singers, conductor and choir close together. This usually meant splitting into petit choeur or soloists, and grand chœur or tutti, along the lines of the récit and plein jeu for the organ. The arrangement worked vocally and instrumentally, and was used in both the Royal Chapel and theatres. 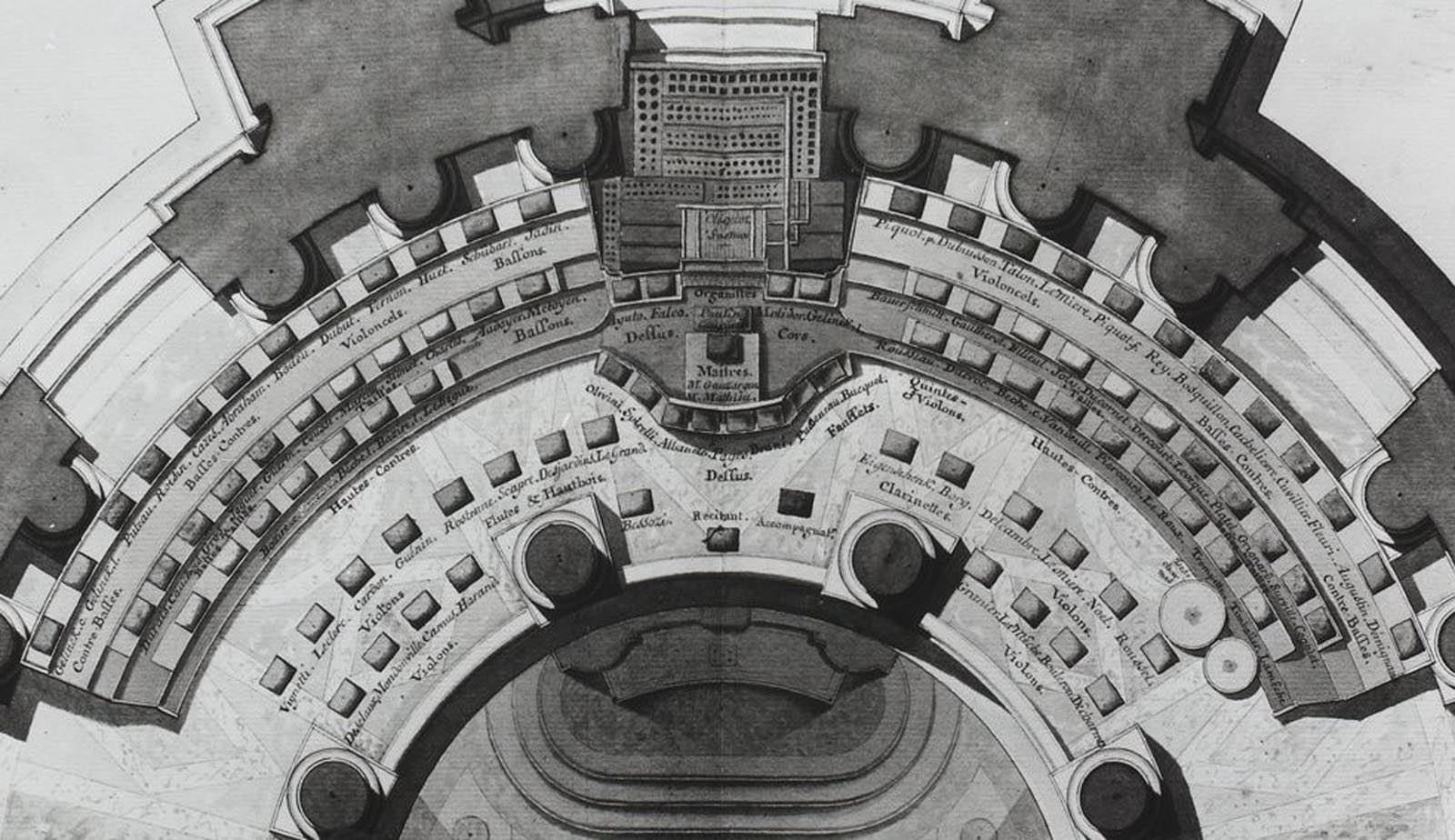 French orchestras were particularly large whether the venue was a concert hall, theatre or church: the resources dispensed by their royal patrons and the importance of Paris musically in the 18th century meant that orchestras became permanent structures unlike anywhere else in baroque Europe Their very number encouraged a particular type of orchestral composition allowing for innovative timbres (with the accent on the flute, bassoon and musette) and particularly imposing orchestral sound, solo voices and chorus. This was reflected in overtures, ballets and theatrical recitatives as well as choral works. The French musical style was imitated throughout the Europe of Enlightenment.

The continuo featured in all baroque orchestral compositions and took very different forms in France. It was absent from open-air ensembles, the polyphonic instruments (e.g. the harpsichord, organ and theorbo) replaced by extra strings (hautes-contre, tailles and quintes) to add texture. At Royal Chapel or Concert Spirituel performances, the organ was used as a continuo instrument with loud organ stops, saving the need for many musicians: one instrument per part sufficed to match string section and organ timbres.

The strings received special treatment for a long time, mainly under the influence of the Vingt-quatre Violons du Roi. Between the reign of Louis XIV and Louis XV, the five-part arrangement changed: first one-part violin and three intermediary parts (haute-contre, taille & quinte) and a bass, and then two-part violins, two intermediary parts (hautes-contre & tailles ) and one bass (double bass). This shift can be seen in composers like Campra and Destouches in the early 1720’s. Although minor, 5-part harmony was adopted by many foreign composers, including Purcell, Handel, J.-S. Bach, Telemann, Haydn and even Mozart.

In France, voices were treated differently: the focus was on the outer parts, high voices for the melody, and bass for the main accompaniment. The inner parts were not used independently, remaining subservient to the outer parts. Their role was mainly to complete the harmony and enrich the rhythm, only rarely featuring counterpoint or purely orchestral fugues.

Many wind instruments were used, a mixture of timbres preferred to solo timbres. For tuttis, flutes or oboes played with the dessus violins with bassoons accompanying the bass instruments, increasing the effect of polarisation. Around 1750, during Rameau’s time, clarinets were used more frequently, promoted by composers such as Gossec and Dauvergne. At the same time, the horn broke free from its hunting connotations, adding texture to the orchestra. It gave French orchestras a distinctive colour, as reflected in Rameau’s last works (1750-1770).

From the early 18th century, autonomous wind instrument compositions tended to be in 3-part harmony, and solo pieces increased. The typically French sinfonia concertante emerged around 1760 and gradually influenced all other musical genres.

Another feature of French composition at the time was the use of novel orchestral instruments like the spinet (often one-part) or musette to evoke military or folk music, respectively.

A music academy was established in 1795 benefiting from the top quality tuition given at the Conservatoire de Musique by virtuoso soloists from the Opéra or the conservatoire Société des Concerts. 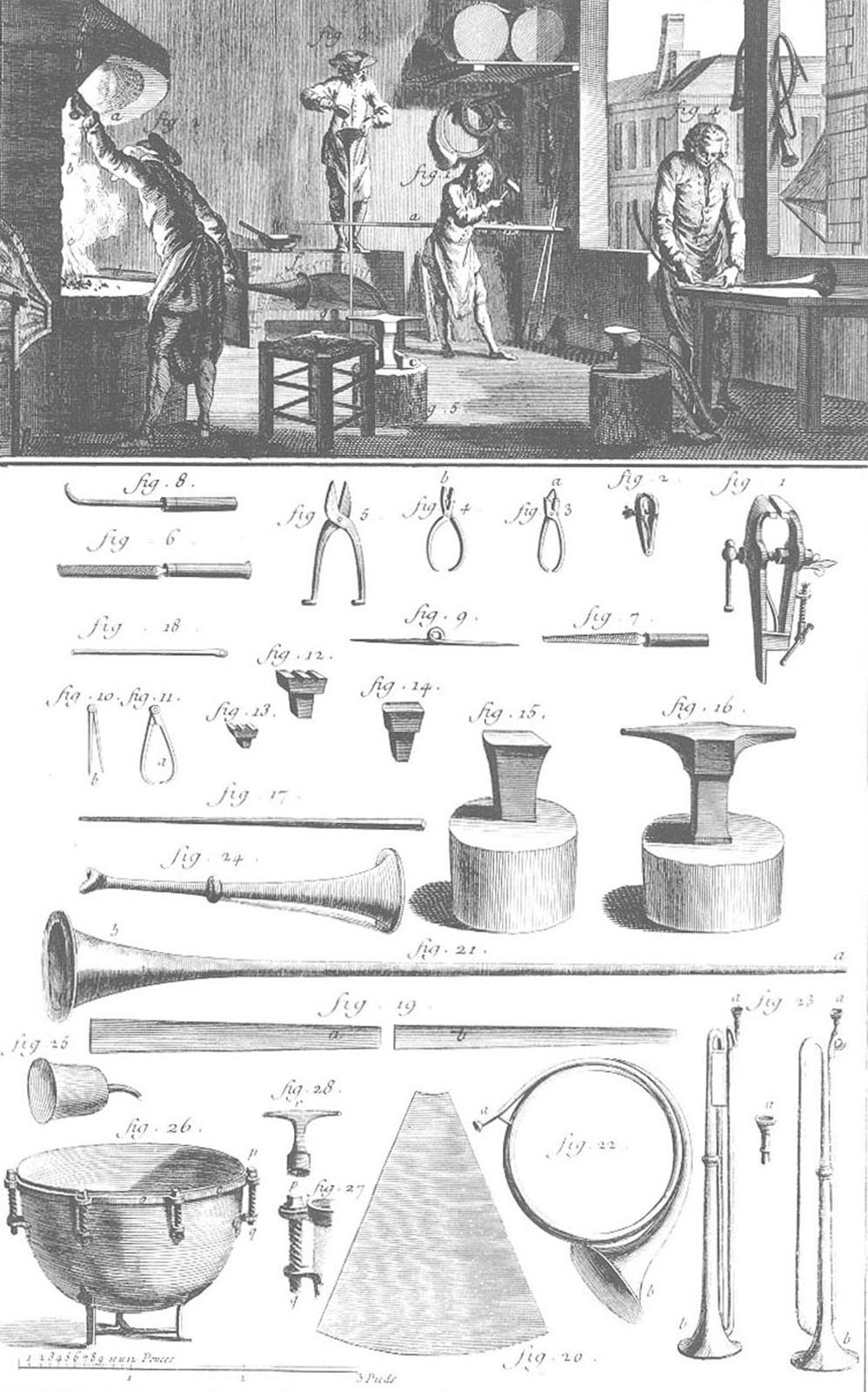