When Louis XIV decided in 1682 to move into the Palace of Versailles (still under construction), his court followed reluctantly. Paris was the royal capital of the Kingdom and an artistic hub, whereas Versailles was a new town struggling with the surrounding marshland. However, moving away from Paris eventually let artistic institutions develop in the capital beyond the control of the Court.

The Académie Royale de Musique was set up in 1669 to cater to French operatic and choreographic tastes. Half a century later in 1725, the Concert Spirituel society was offering Parisians top quality music and restoring the city’s prestige, while Versailles waned musically in the runup to the Revolution. 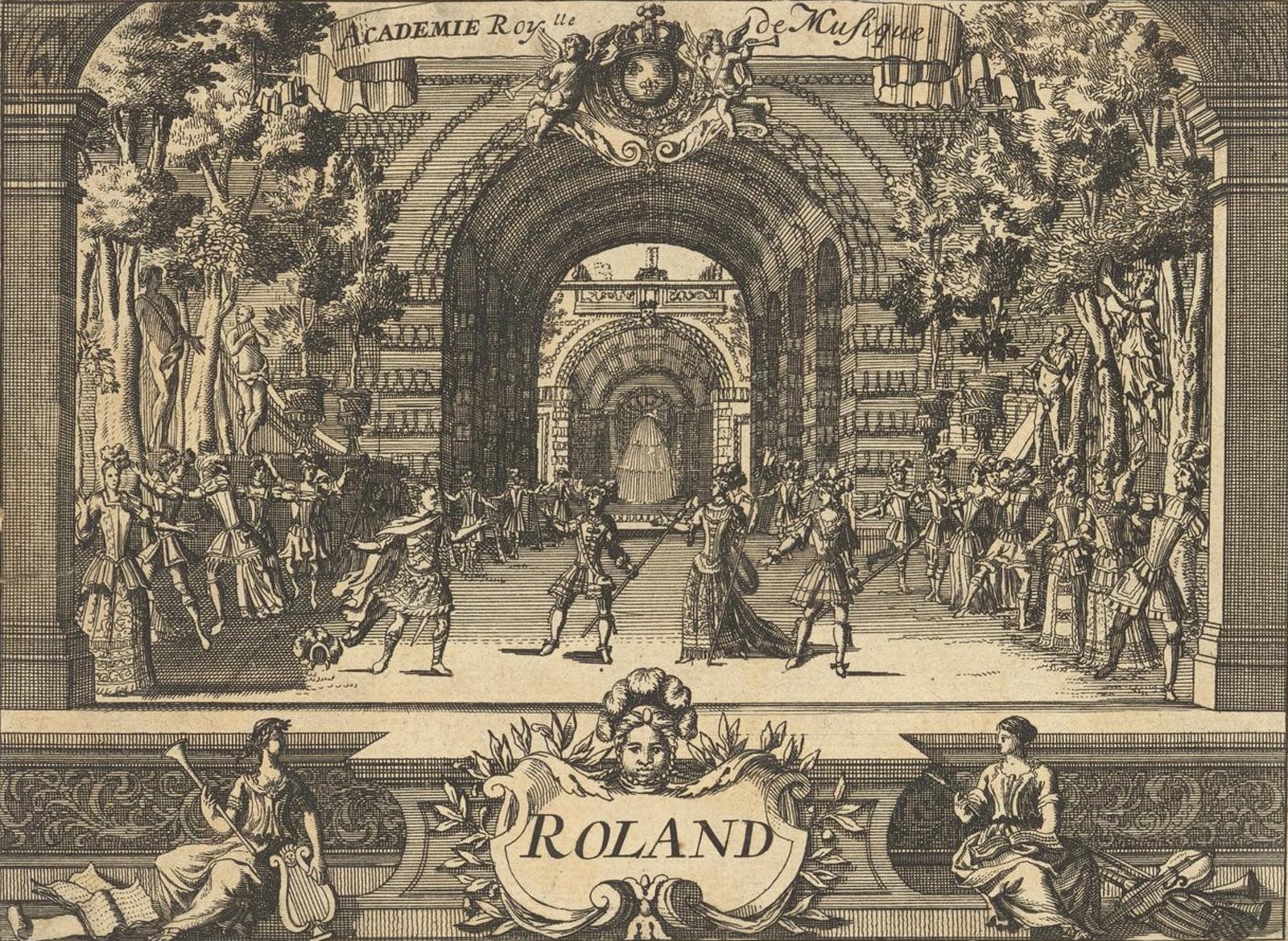 Instituted by Louis XIV, the Académie Royale de Musique (now the Opéra de Paris) gathered the resources required to stage ambitious spectacles: an orchestra, choir, soloists, professional dancers, machine operators, and costume and stage designers. In 1671 it was put under the control of Jean-Baptiste Lully, the creator of French opera. Supported by Louis XIV, he conceived a full-blown spectacle encompassing poetry, music, dance and theatrical stage effects. The new tragédie lyrique genre was born, which dominated the French stage until the beginning of the 19th century when it evolved into French grand opera under the influence of the emerging Romantic aesthetics.

Lully composed a new work every year usually for carnivals, in collaboration with poets, stage and costume designers and prestigious choreographers. He trained performers, orchestra, choir and soloists, encouraging them to surpass themselves in his endeavours.

When Lully died in 1687, the Opéra had become the leading theatre in Europe and was to remain so for nearly two more centuries, with opera houses opening in Lyon, Lille, Bordeaux, and Rouen.

Although running at a deficit throughout the 18th century, the Académie Royale de Musique adapted to please its audiences by inventing new genres like the opéra-ballet, pastorale and comédie lyrique, inviting the best composers and offering increasingly theatrical spectacles, notably with elaborate stage machinery and decor. However, the Académie Royale de Musique’s structure meant it had to remain relatively conservative, with its permanent troupe, choir, orchestra and ballet corps and tradition of repeat productions. Popular works (e.g. Armide by Lully, Les Fêtes vénitiennes by Campra and Les Éléments by Lalande and Destouches) were performed for almost a whole century.

Jealously guarding its repertoire and privileges (it had the monopoly over musical theatre), the Académie Royale de Musique often came into conflict with other Paris theatres such as the Comédie-Française and Opéra-Comique, or fairground shows.

1752 was the year of the Querelle des Bouffons, a dispute between defenders of French music spearheaded by Jean-Philippe Rameau, and proponents of foreign and notably Italian music led by Jean-Jacques Rousseau. The Académie Royale de Musique was seriously damaged by the controversy. Rameau was the institution’s key composer at the time and almost the only figure to escape criticism from Queen Marie Leszczynska’s modern-minded musicians.

The Concert Spirituel society, founded early in the reign of Louis XV and housed in the Tuileries Gardens, was the main provider of public concerts up until the Revolution. Subordinate to the Académie Royale de Musique which held the royal privilege for musical spectacles, Concert Spirituel had to pay royalties and could only hold concerts when the Opéra was closed during religious festivals. Composed mainly of musicians and singers from the Académie Royale de Musique and a few Court musicians, it staged about twenty performances per year.

Its aims were both artistic and commercial. The founder Anne Danican Philidor assembled sixty musicians, half of whom were instrumentalists, confident that a large ensemble would appeal to the public. Its reputation for fine music quickly spread throughout Europe.

The institution moved with the times. By the end of the 18th century grands motets, at first the bulk of the repertoire, gave way to more modern musical genres like the symphony, concerto and oratorio. Foreign composers were welcomed: Pergolese, Haydn, the Stamitz family, Sacchini and even Mozart. Its twenty violins surpassed the Académie Royale de Musique: the bass comprised 6-8 cellos and 2-4 double basses; wind instruments were split into groups of 3 or 4 as in the Opéra. Clarinets, horns, trumpets and kettledrums only joined the orchestra definitively in 1778, while trombones remained intermittent features.

Around 1780, the Concert Spirituel orchestra looked very similar to the future romantic orchestra. It was admired for its size, quality and particularly its ability to play with only the first violin as conductor. Audiences waited for the first stroke of the bow at the start of each piece with bated breath.

Although focused on musical declamation, the main Paris theatres (the Comédie-Française, Théâtre de la Foire and Opéra-Comique) all had orchestras to play overtures and intervals, or to accompany sung or choreographed interludes, particularly in comédies-ballets where they fast became essential. Their size reflected the resources available: the Théâtre de la Foire had only a few instrumentalists and the Comédie-Française around thirty. Orchestras tended to prefer strings, dessus and basses, sometimes dispensing with violas and wind instruments.

The pieces composed for the Théâtre de la Foire orchestra were mainly comedies intersperse the future opéras-comiques. Some were even parodies of serious works. After 1770 some orchestras (particularly the Opéra-Comique’s Salle Favart) took on more musicians and had a permanent structure capable of rivalling the Académie Royale de Musique.

The Saint-Germain and Saint-Laurent Fairs took place in Paris every year, the former from early February till on Palm Sunday, and the latter from mid-June till the end of September. These major events were open to all the social classes and extremely popular. They attracted tightrope artists, puppeteers, strolling musicians and other popular entertainers. 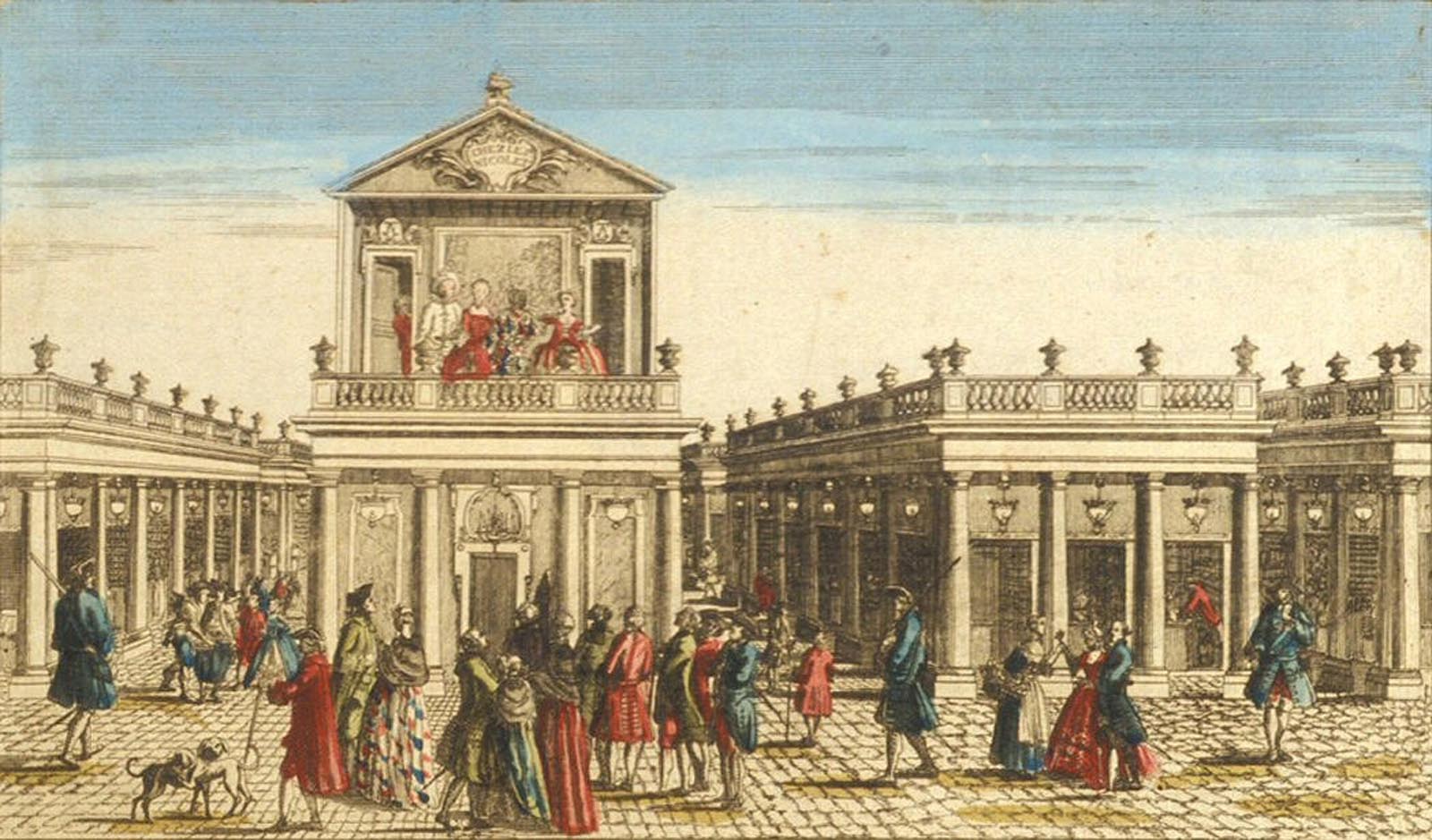 When the Théâtre Italien closed in 1697 the Théâtre de la Foire came into being: fairground troupes appropriated some French repertoire and set up a permanent theatre. The Comédie-Française immediately tried to ban it, and innumerable disputes followed with the privileged theatres in the capital until the end of the century. Fairground actors resorted to pantomime, stage signs, puppetry and vaudeville to get round the censorship.

In 1714, a society was formed bearing the name Nouvel Opéra-Comique (today’s Opéra-Comique). Poets such as Lesage, d’Orneval and Fuselier wrote scenarios which were set to music by Gillier, Aubert, Mouret or Rameau. Parodies of productions by the Académie Royale de Musique or the Comédie-Française were all the rage. In 1734, Favart produced his first libretto and quickly became the king of opéra-Comique. In the 1750’s, the repertoire changed dramatically with the arrival of composers like Rousseau, Blavet and Dauvergne.

This change heralded the final development of the genre which composers such as Monsigny, Philidor, Duni and Grétry raised to the rank of fully-fledged opera, leaving the Théâtre de la Foire to become an official theatre under Louis XV in 1762.