The birth of opera

Cardinal Mazarin introduced Italian opera to the Court in the 1650’s. Cavalli’s music went down well with French audiences, but when Louis XIV came to power in 1660 its popularity waned and French opera only came into being some ten years later. Composer Robert Cambert and librettist Pierre Perrin conceived the first ‘French’ pastorale Pomone which was performed in the new Académie Royale de Musique in 1671. Audiences were astonished at the mixture of poetry and music.

The Académie Royale de Musique then came under the control of Jean-Baptiste Lully, the true founder of French opera. At the request of Louis XIV and with his full support he came up with a spectacle divided equally into song, music, poetry, dance and theatrical effects. The tragédie lyrique was born. The genre was to dominate the French stage, evolving into romantic grand opera at the turn of the 19th century.

The Académie Royale de Musique was founded in 1669 to produce and administer this new form of entertainment. From 1672 onwards Lully organised a new production every year, collaborating with poets such as Quinault, set designers such as Bérain and Vigarani and prestigious costume designers and choreographers such as Beauchamp. Orchestras and choirs, solo musicians and dancers were driven by Lully to surpass themselves in this new art form. 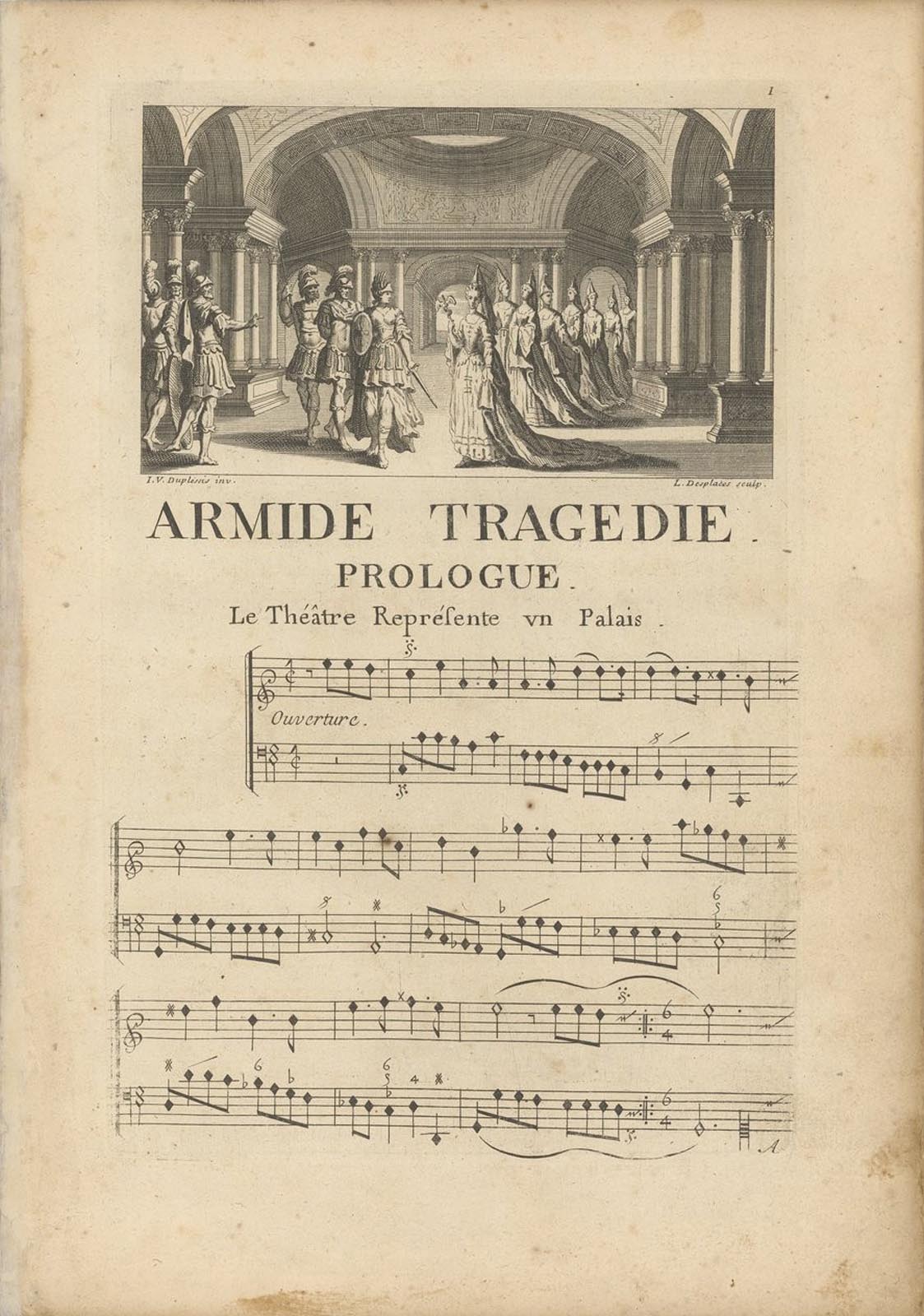 Lully was the sine qua non composer throughout the 18th century, skilfully mastering the operatic art form. By his death in 1687, the Paris Opera had become Europe’s top theatre, and was to remain so for almost the next hundred years. His legacy formed the basis of the repertoire of the Académie Royale de Musique and other French theatres. Some of his works were translated, adapted and performed abroad.

The heyday of Campra and Destouches under Philippe d’Orléans 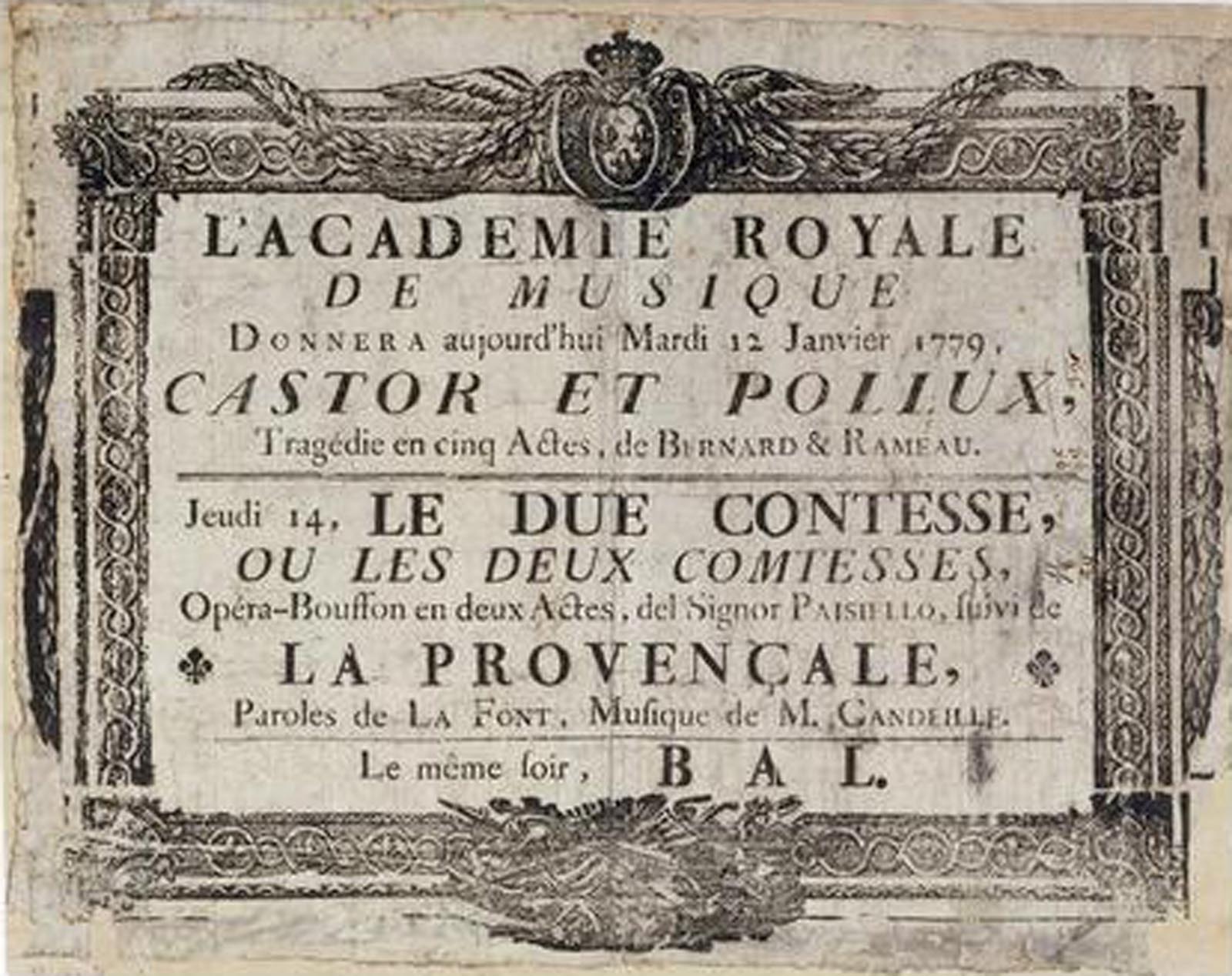 Rameau, a legend under Louis XV

Once Louis XV came to the throne in 1723 the genres blurred somewhat, notably with the advent of the ballet héroïque, which had the lofty tone of the tragédie lyrique and the form of an opéra-ballet. The first of these (Les Fêtes grecques & romaines in 1723 by François Colin de Blamont and Les Éléments in 1725 by Michel-Richard de Lalande and Destouches), extolled the young king and recalled the glory of Louis XIV.

The ballet héroïque and tragédie lyrique remained popular with composers and the public for almost half a century.

In 1733, Jean-Philippe Rameau introduced a change in the course of opera with his Hippolyte & Aricie, and conservative Lully supporters clashed with the more modern-minded Rameau supporters. Once audiences got over the shock of Rameau’s novel rhythmic melodies they took to the composer’s bold approach and he became the first French musician to achieve star status throughout Europe.

Without undermining Lully’s classic French style, he surpassed the advances made by the previous generation. Most of his compositions between 1733 and 1764, both his tragédies lyriques (Castor & Pollux) and ballets héroïques (Les Indes galantes) were very successful. His one-act pieces for court entertainment were warmly received in Paris, as was his comédie lyrique ‘Platée’ (1745).

The ‘Querelle des Bouffons’ (1752 - 1754) was the battle that raged between rival musical philosophers, poets and musicians. Defenders of French music supported Jean-Philippe Rameau, while those favourable to other musical genres supported Jean-Jacques Rousseau, who notably saw the merits of Italianising French opera.

The dispute rocked the Académie Royale de Musique to its foundations. The discovery of Italian opera buffa aroused criticism of the French grand opera style as dated and grandiloquent, although it survived for another twenty years or so, mainly thanks to Francœur and Rebel (1757-1767). However, the arrival of comic opera in the Paris Foire theatres, and the success of young François-André Danican Philidor, Pierre-Alexandre Monsigny, Egidio Romualdo Duni and André-Ernest-Modeste Grétry influenced the repertoire of the Académie Royale de Musique. Forerunners of European classical music, these composers gradually evolved their style without relinquishing the lofty aesthetics of the marvellous. Key illustrations of this changing trend are Ernelinde princesse de Norvège (1767) by Philidor, Céphale & Procris (1773) by Grétry, and Sabinus (1773) by François-Joseph Gossec.

On arriving at Versailles in 1770, the young Dauphine Marie-Antoinette, future Queen of France and avid music lover, supported this new movement.

When Louis XVI came to the throne in 1774, the Queen was able to influence French taste by opening the doors of Versailles and Paris to foreign composers. Performances of Iphigénie en Aulide (1774) by German composer Christoph Willibald Gluck stunned the public and marked the end of the old repertoire. 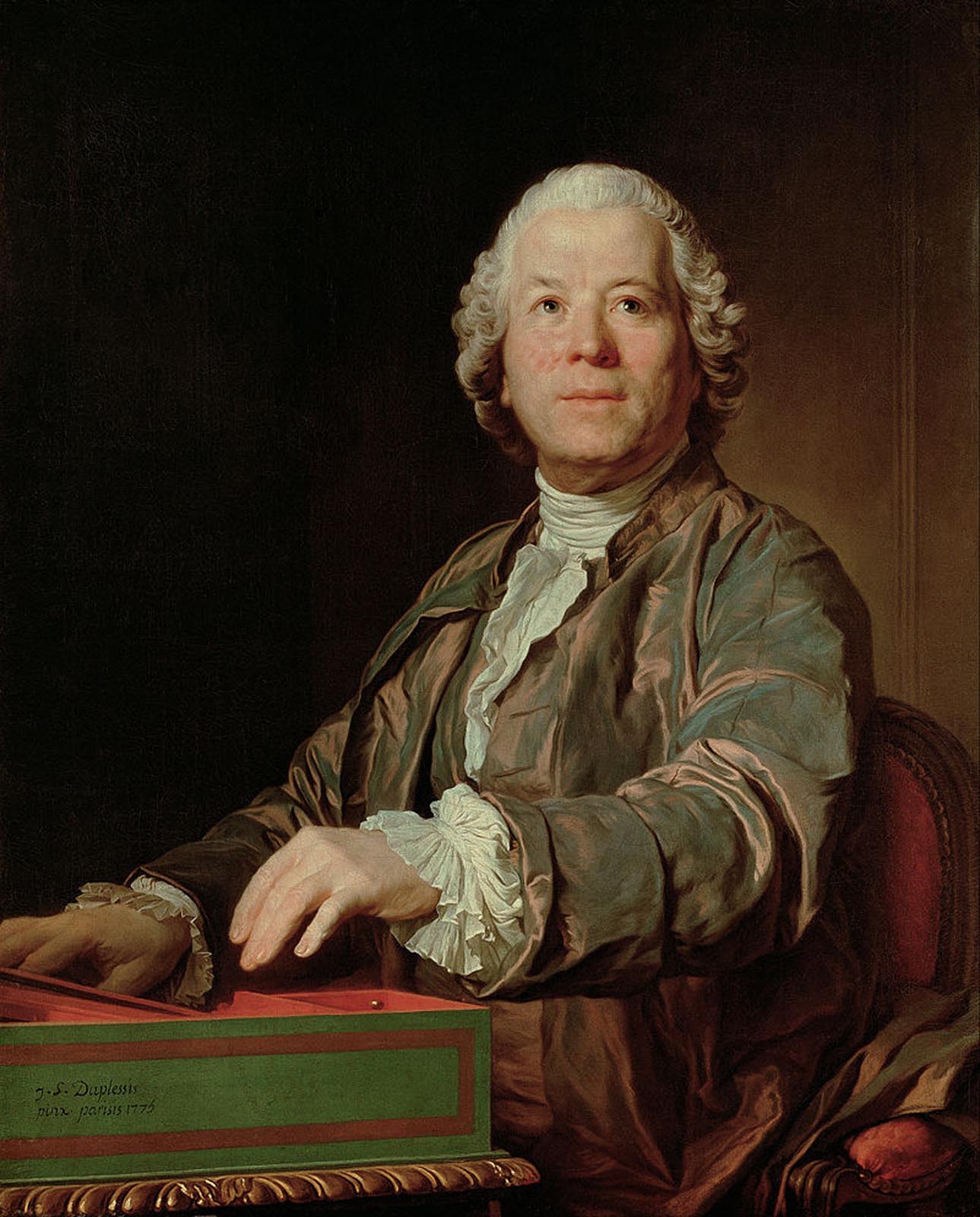 His tragedies avoided decorative elements and encouraged a return to Lully’s grand operatic style. His Orphée & Euridice (1774) and Iphigénie en Tauride (1779) were immensely successful and served as models for the new repertoire. Gluck remained the unquestioned leader up until the Restoration in 1814 and the arrival of Rossini and Meyerbeer in 1825-1835. Gluck represented the German style, and was rivalled by Italian Niccolo Piccinni. The battle between Gluck and Piccinni supporters split the Académie Royale de Musique in 1778 until Gluck left for Vienna in 1779.

Alongside these sombre, grandiloquent tragédies lyriques were two other popular genres, namely the ballet pantomime, ancestor of the grand ballet romantique created by cosmopolitan choreographer Jean-Georges Noverre, whose masterpiece Médée & Jason made a considerable impact; and then in 1782 Grétry’s comédie lyrique, illustrated by his La Caravane du Caire which became a major comic theatrical genre.

Until the late 18th century the term ‘acteur chantant’ was used to describe opera singers at the Académie Royale de Musique, as opposed to mere singers or church cantors. The name emphasises the importance of both acting and musical declamation.

Performers from the Académie Royale de Musique were prominent figures in 18th century Paris society. Much was written about their performances, and the public avidly read about the scandals in their private lives. Opera players lived in style and had close connections with financial and political circles. Their avant-garde artistic tastes and free lifestyles produced many pioneers of new ideas. Although not excommunicated like actors from the Comédie-Française, they were disapproved of by the more conservative milieu and some were even denied the holy sacraments.

The permanent troupe at the Académie Royale de Musique existed until the mid-1960’s, although it changed gradually over the centuries. In 1713, regulations stipulated fourteen solo singers but this rose to around thirty by 1778. This closed circle was very different from other troupes in Europe at the time. Musical declamation (articulation, flow and projection) and acting (gesture, pauses and pantomime) dominated French opera. Some of the actor-singers had their début at the Foire or Comédie Française, performing Corneille, Racine or Molière before joining the Opéra.

In 17th and 18th century France tessitura (soprano, mezzo-soprano, tenor, baritone and bass) and vocal typology (coloratura, light, lyrical, dramatic) were not as clear-cut as later on in the Romantic era. Vocal ranges were described by listing first male then female singers, from low to high pitch (basses-tailles, tailles, hautes-contre), and then the actresses (without specifying the female registers). About ten ranges were thus eclipsed: five male voices (from high to low pitch:haute-contre, haute-taille or tenor, taille, basse-taille & basse or basse-contre) and four female voices (high to low pitch: haut-dessus or dessus léger, dessus, bas-dessus or grand dessus & contralto).

French tessitura were characterised by their central positioning except for the very high haute-contre. In Italy female voices were higher. Throughout the 17th and 18th centuries the Académie Royale de Musique tuning pitch was a tone lower than at present. This indicates specific vocal techniques and voice placement, with the focus on projection and text rather than on actual singing.

Throughout the 18th century almost all the vocal registers gradually expanded. Around 1680 the solo roles composed by Lully for Mlle de Saint-Christophe spanned just over one octave (D4 – F5), while a century later Lemoyne and Vogel wrote for voices spanning over two octaves (A3 – C6).

Soloists in the troupe were split into three Catégories according to their importance and salary, namely Premiers Sujets (main singers), Doubles (stand-ins for the main singers) and Coryphées (choristers with minor roles). The rotation system meant that a piece could be performed several times a week, sometimes for over two months. Some composers like Lully, Rameau and Gluck were very particular about the casting and rehearsed painstakingly until satisfied.

Singers were attributed Emplois relating to physical appearance, stage presence and vocal colour. Females were ‘Princesses, Shepherdesses and Heroic Nymphs’ or else ‘Queens, Mothers and Magicians’, while the males were ‘Princes, Warriors and Heroic Shepherds’, or else ‘Kings, Fathers and Magicians’ There were also minor roles (‘grands accessoires’) - divinities, masters of ceremony, high priests, etc.), character roles (Allegories, comedians, etc.), and choir singers were given small solo parts.

From the mid-18th century onwards, existing compositions were adapted to the voices of new troupe members. Vocal scores really began to change at the end of the 17th century, with Campra, Destouches and Stuck and the advent of virtuoso Pages under the influence of Italian opera. There was a shift in singing style, with more focus on interpretation and the singing voice.

In the mid 1770’s the art of singing changed considerably under Gluck, becoming more expressive and intense. This could affect musicians’ voices and shortened many a musical career.

Further technical changes appeared in the mid 1780’s, when the craze for Italian style singing invaded the Paris opera, banishing natural sounds. The École Royale de Chant et de Déclamation was set up in 1784, to become the Conservatoire in 1795, which gradually institutionalised the change. As time went by voices evolved, becoming denser and more lyrical, sometimes to the detriment of suppleness and high notes.

Actor-singers were spotted at public concerts and provincial choir schools and recruited at the request of the King. They underwent a trial period, often performing at Court or Concert Spirituel concerts. Very few became soloists, and then only as places became vacant. A singer’s career was often determined by the premature death or retirement of a troupe member, which resulted in systematic upgrading.  Some, however, made their mark first time on stage, upsetting the hierarchical system. Actor-singers, if continuing to perform to standard, had to serve for 20 years to qualify for retirement.

Their pay was based on their category. Some could negotiate pay increases with the Administration, conditioned by years of service and reputation. A bonus system often boosted their basic pay. Some actor-singers also held the Musicien ordinaire du roi diploma which provided extra pay. Finally, certain actresses could enjoy a network of protectors who provided them with a comfortable lifestyle. 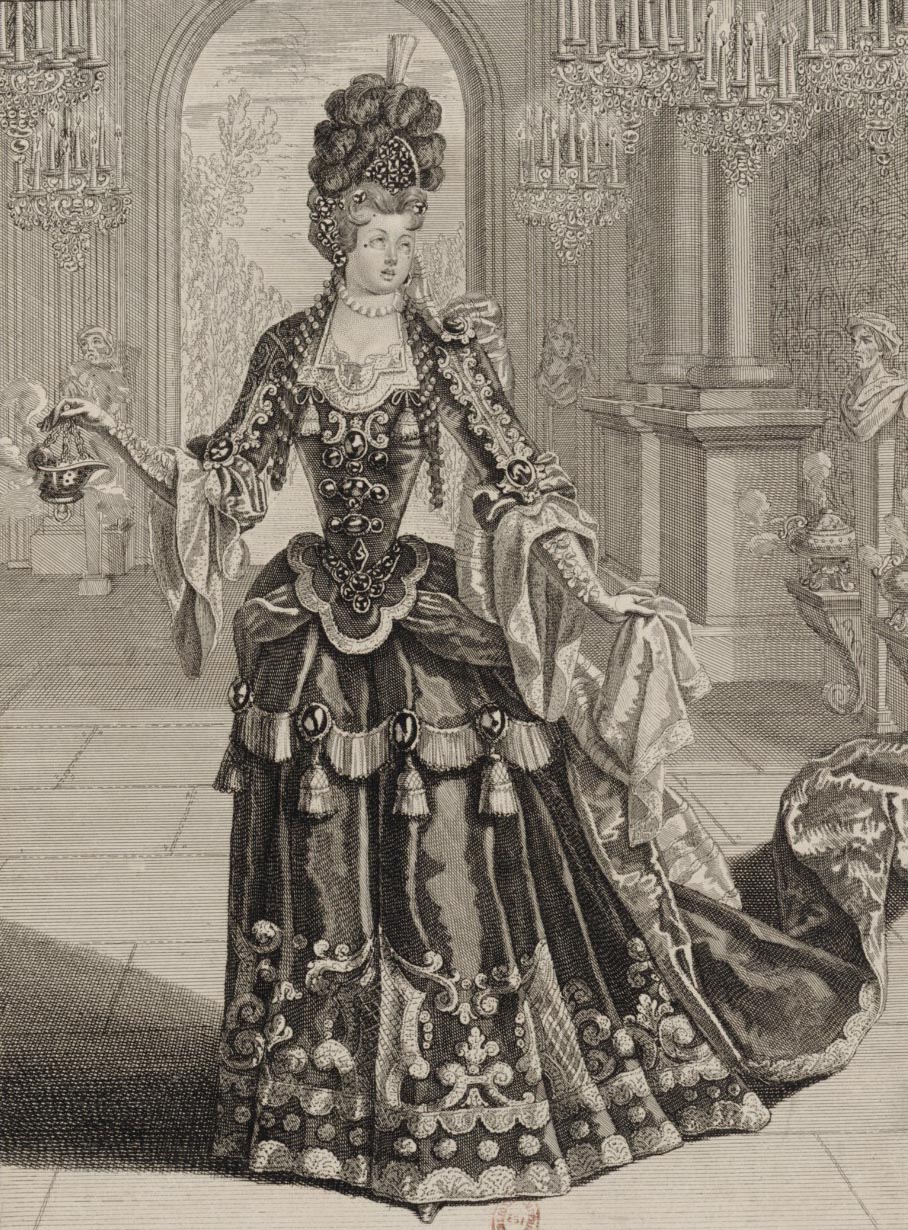 The ballet corps had the same hierarchical structure: there were noble dancers, comic dancers and minor characters (still the most numerous and demanding!).

Composers wrote with specific singers and dancers in mind, devising or adapting roles. Having prestigious members in the troupe influenced the repertoire and offered composers an opportunity to experiment with the operatic art form and choreography: in the 1680’s Lully worked with Marie Le Rochois, Louis Gaulard Dumesnil and François Beaumavielle ; in the 1740’s Rameau and Mondonville worked with Marie Fel, Pierre Jélyotte and Marie Sallé; and Gluck and Noverre worked with Rosalie Levasseur, Joseph Legros, Henri Larrivée, Gaëtan Vestris and Marie-Madeleine Guimard.

Very quickly the institution expanded to the major French cities. Lyon, Bordeaux, Marseille, Metz and Nancy had acquired opera houses by the middle of the 18th century.  These theatres paid high royalties to the parent company, took on a permanent choir, orchestra and theatre troupe and took advantage of the tours organised each season for the Paris stars. The repertoire was identical to that of the capital, but was adapted to suit the number of players and resources of each theatre. Only towards the end of the 19th century did provincial theatres become independent and diversify their repertoire, programming ballets, grand opera and opéras-comiques.