The motet, sacred genre of the Grand Siècle

France was governed under the Ancien Régime by Kings with divine rights who founded their authority on the Catholic faith. Liturgy was therefore extremely important and great attention was paid taken to transmitting monarchical traditions and values.

The importance of the Maîtrises music schools

Musical training was usually provided by Maîtrise schools attached to every cathedral and most collegiate churches in France. Most musicians, including Lalande, Campra, Marais and Desmarest, studied there.

These schools perpetuated the great liturgical tradition and supplied the Kingdom with brilliantly trained musicians. They taught plainchant (medieval monodic chant) which endured alongside the new baroque genres as well as polyphonic masses, legacy of the Renaissance.

Religious music was constantly torn between tradition and modernity. To preserve tradition it resisted innovation, although it was influenced by it.

Strains of modernity filtered into choir schools from the Chapelle Royale, the oldest royal music department which housed the singers and musicians involved in ordinary church services at the Court. It had a choir, like chapterhouse music schools, but only for male singers and children from the cleric-run Pages de la Chapelle choir. There were therefore no female voices in religious music, even though Louis XIV was known to request female solo recitals.

In the early 17th century, sacred vocal music was mainly accompanied by the serpent, a wind instrument which set the tone and backed the bass. The continuo appeared in sacred music, the bass bow and other instruments (viola, violone, cello, bassoon, etc.) soon replacing the serpent. To augment the sound, voices were backed by cornets and trombones; purely instrumental pieces usually played on the grand organ gradually made their way into church services.

A new trend emerged in the Chapelle du Roi in the mid-17th century. The King’s Mass was a major daily event at Court, and it became a public event, asserting the King’s persona in the realm of the temporal and the spiritual. It demonstrated the piety of the sovereign and served as a reminder of the principles of Gallicanism, a doctrine extolling the autonomy of the Monarch as regards the Pope, and that of the French church as regards the Roman Church.

This ambivalence came across clearly in the King’s Mass. Parallel to the traditional liturgy heard in the royal chapel during the major Calendar Masses, the King’s daily mass had its own liturgy which followed Roman ritual while emphasising the presence and importance of the Monarch. A low mass was held at the altar, while on the King’s floor, children, cantors and musicians from the famed Musique du Roi performed two types of motets – a grand motet lasting around 20 minutes with soloists, choir and instruments, and a smaller petit motet during the contemplative elevation ritual, followed by a prayer for the King (Domine salvum fac Regem).

The pattern changed little throughout the reign of Louis XIV, although perhaps the petit motet declined slightly as the grand motet gained importance when the Court moved to Versailles.

The texts chosen for the royal liturgy included psalms (notably songs of praise), texts from the Fathers of the Church plus specially composed contemporary neo-Latin poems - all designed to extol the piety and grandeur of the King. 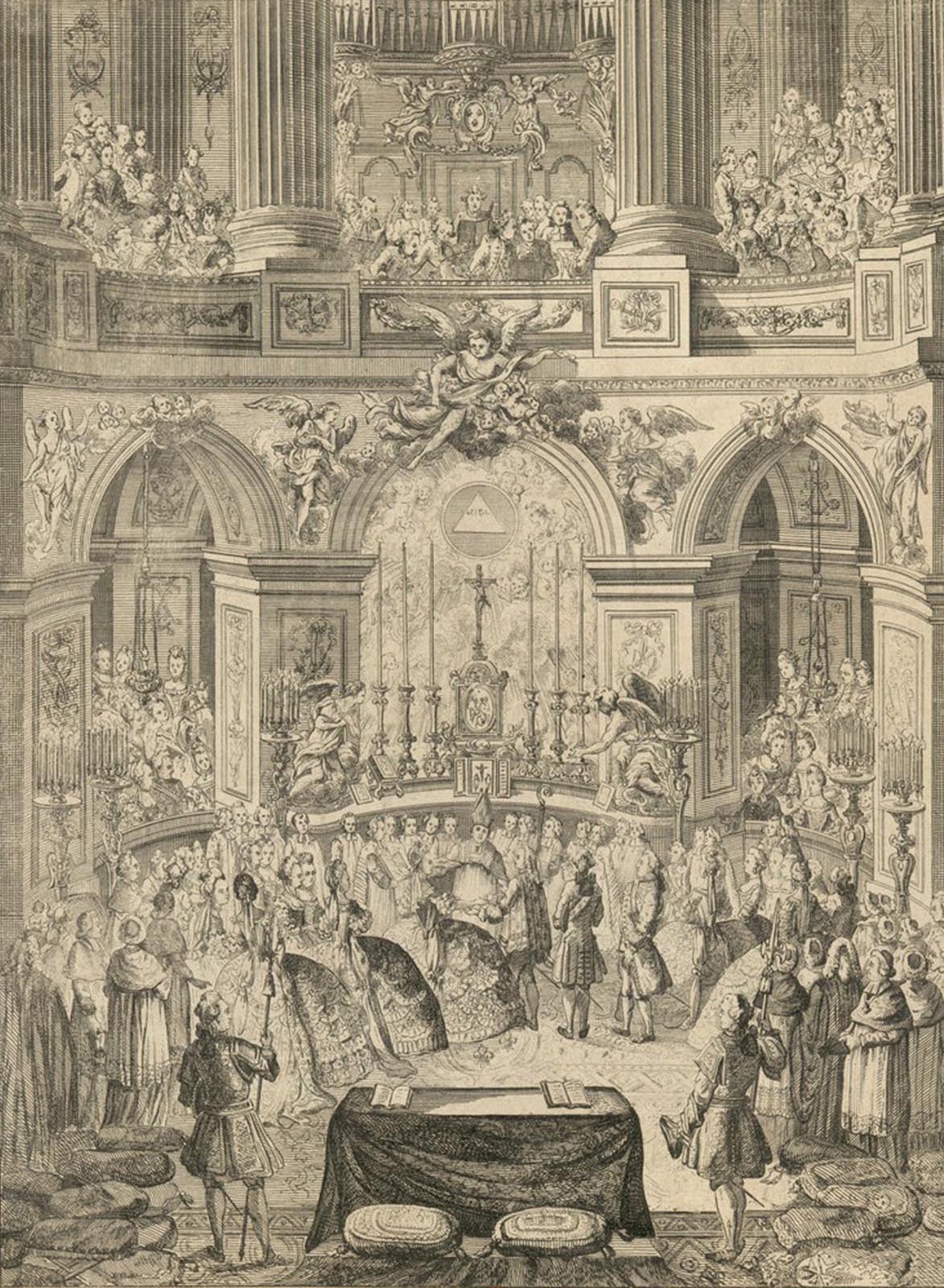 Sub-masters of the Chapel of Louis XIV, Henry Du Mont and Pierre Robert provided examples of the motet genre which Lully and later Lalande were to develop under the auspices of the King into the grand motet. It was a national, truly French musical genre, alongside the tragédie lyrique, air de cour and suite de danses, marking a move away from the Italian music dominating Europe in the early 17th century.

The grand motet double chorus (small group of soloists and large choir) is an exclusively French genre. Its origins are attributed to Nicolas Formé from the time of Louis XIII, but it was Lully (Écuyer-Secrétaire-Conseiller du Roi and Superintendent of the King’s music) who provided the genius. Jean-Baptiste Lully, Marc-Antoine Charpentier, Michel-Richard de Lalande, André Campra and Jean-Joseph Cassanéa de Mondonville were also major figures.

Of Lully’s twenty-three surviving sacred musical works, twelve are grands motets. His role as Superintendent, which he exploited fully, gave him control over the music being produced at Court and at the Académie Royale de Musique. His music served as an example, his grands motets complying with the need to glorify the King, and most of his works performed on important state occasions. He headed the Musique de la Chambre, the Musique de la Chapelle and at times the Écurie orchestras. 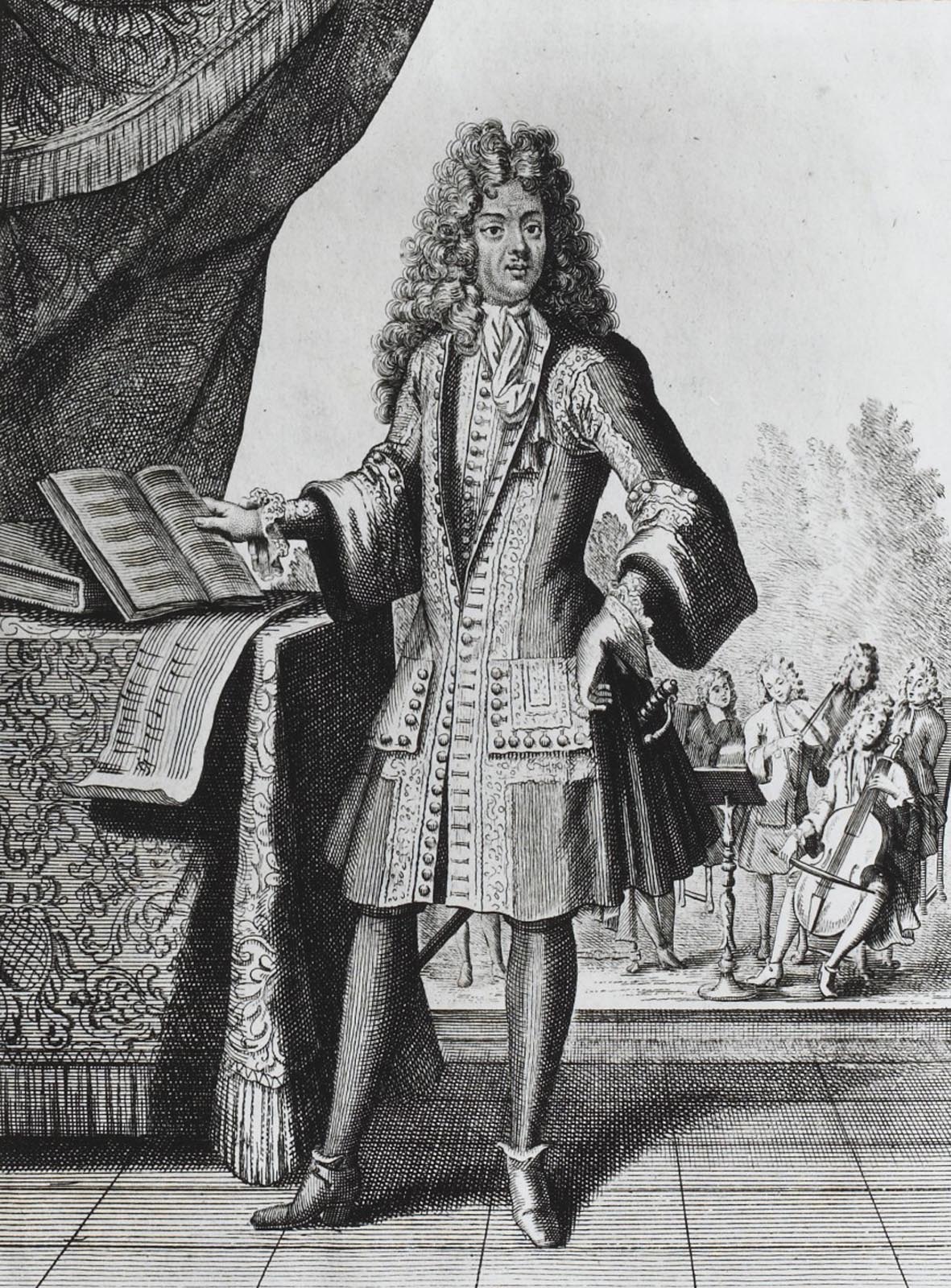 For the funeral of the wife of Philippe d’Orléans the King’s brother, Lully composed a Miserere, a grandiose version of the grand motet. This novel composition was played before the whole Court and signalled the separation of the French monarchy from the tutelage of Rome. The work required a host of instruments - the Grande Bande violins, violes da gamba, theorbos, recorders, traverse flutes, oboes, bassoons, a harpsichord and an organ.

The Marquess of Sévigné noted that there was not a dry eye in the audience on listening this masterpiece.

Lalande’s grands motets epitomised the construction of the musical image of the Monarch. His greatest mark on contemporary music were his 77 Motets à grand chœur which he composed for the King’s daily mass in the royal chapel.

The Te Deum represents the apex of the King’s magnificence. In France every victory, peace treaty or state event (coronation, marriage, birth, convalescence, birthday, etc.) was celebrated with his resounding Te Deum. Under Louis XIV this hymn played a fundamental role in royal protocol. Like many of the composer’s other grands motets, the Te Deum featured prominently at the Concert Spirituel (an institution providing music to Parisians when the opera closed during Lent and Holy Week).

The petit motet developed in the 1640’s under Louis XIV and became the most common form of religious music along with the motet à grand chœur. Usually played during the Elevation ritual, for the Sacraments or as an antiphon at major liturgical festivals, petits motets were sung in all major French religious institutions such as convents, the Royal Chapel and the Maison Royale de Saint-Cyr (a school for girls from poor noble families) founded by Madame de Maintenon. Depending on the occasion, they comprised 1 - 3 three male, female or mixed voices, with or without accompaniment or ritornellos.

Whereas the motet à grand chœur was primarily drawn from psalms, the petit motet was intended for the more personal moments in the liturgy, texts with inner spirituality reflecting the nuances of the soul. At the dawn of the 18th century the petit motet, along with instrumental music and the cantata, was influenced by the wave of Italian music which swept through musical circles, encouraging musicians to reconcile the different trends and ignore the often virulent aesthetic disputes. Gradually the petits motets became more fluid, virtuoso and structured, moving the genre forward like the cantata, a type of miniature opera which had become the fashionable new secular genre.

Reflecting tradition as much as the changing trend towards more elaborate forms and a more Italian feel, the petits motets in the early 18th century reflected a transformation in aesthetics.

Composers such as Morin, Bernier, Charpentier and Campra gradually blurred the distinction between the religious and the secular, notably via increasing musical theatricality. Similar to the cantata (its salon equivalent), the petit motet acquired a more urbane slant in the early 18th century, bolstered by the popularity of the concertante style and vocal virtuosity.